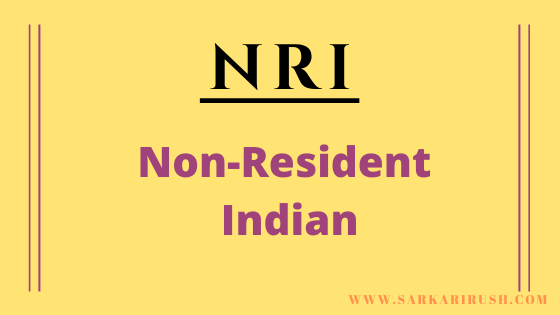 The NRI full form is Non-Resident Indians. An NRI (Non Residents Indians) is a person who is a Indian citizen but migrated to another country. For example, now you are living in India but after some years you decided to shift another country such as the US, Canada, Dubai etc then you will be called as NRI.

There can be various reasons to shift to another country such as to expand business, Job, for study or education purpose and others.

Education is also one of the major reasons to move to another country, almost every student dreams to study abroad and sometimes he/she also settles there after completing the study.

NRI is also known as Overseas Indian or expatriate Indian.

There are various reasons to migrate from own country to other countries which are as follows:

Education is one of the important factors which play a vital role for becoming NRI. There are many teenagers who have completed their education in other countries.

Job is also one of the major reasons to become NRI. Such as, after completing your study in India you got placement and job offer from other country, then it cause to become NRI.

Medical issue and problem is also one of the reasons to become NRI. Suppose, if some one is suffering from the disease which is not treatable in his/her own country, then he/ she will move to another country where proper treatment is available.

The full form of NRI is Non-Resident Indians who are born in India and migrated to another country. According to definition, “a person who stays in the country (India) for less than 182 days in a financial year is termed as “Non-Resident Indian”.