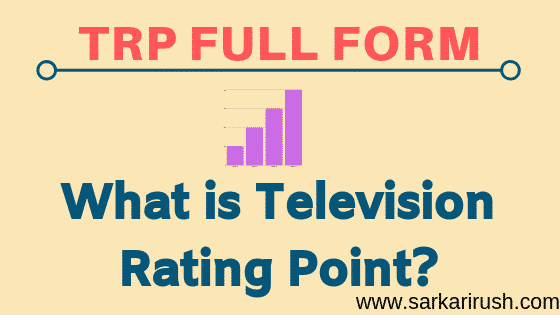 Full form of TRP is Television Rating Point. TRP is a tool which is used to measure/indicates the popularity of a particular channel-such as TRP of Star plus, Sony, colors, Life OK and other channels.

TRP is also used to measure the popularity of a particular serial or program. Suppose at 8:PM Kapil sharma show live on Sony TV and on the other hand Kumkum bhagya show live on Zee TV at the same time, now where audience is high or more that particular program TRP will also be high. And it can check the by seeing analytics.

TRP analytics play a very important role for a particular channel or serial.

It also give the idea about viewer choice or viewer likes/dislikes.

Some of the methods to calculate TRP are as follows:

To calculate TRP mainly a device is used to attached to the TV set in a few thousand viewers and these data is used to measure overall performance and an average is taken for 30-day period to know the actual viewership status.

And the second device called People’s meter is used to record time programme that a viewer watches on a particular day and time. People’s meter provide full detail about like Youtube analytics, such as demographics, Age group, Device, Geo-location and other information.

High TRP leads to high income for a particular channel.

As we all know the income of TV Channel mainly depends upon advertisement, their main source of income is ads, so the channel will high popularity can easily grow, Pay salary to Employees and can also expand their brand and others.

On the other hand Channel with low TRP has low income/revenue, cheap advertisement offer with low pay and not easy to survive in the long run and to compete with competitors.